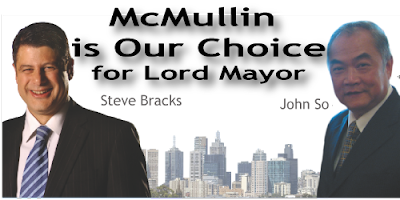 IN a bold statement of support former ALP Victorian Premier, Steve Bracks, and outgoing Lord Mayor, John So, have teamed up to support Peter McMullin’s bid for the keys to the Limo and Melbourne’s Gold Chains and Mayoralty Robes.
John So’s tacit endorsement has placed at odds Catherine Ng and Garry Singer’s chances of winning. Both Singer and Ng were key players in John So’s Team.
Garry singer was John So’s running mate and Deputy Lord Mayor in 2004 and Catherine Ng was So’s number one “Lead Candidate” for the Council.
John So’s support for Peter McMullin is a slap in the face and a final act of betrayal. It has been common knowledge around Clown Hall that John So could no longer work with Catherine Ng and that she had played a pivotal role in John So’s decision to retire and not to seek a third term of office as Melbourne’s “Favorite” Lord Mayor.
Backs and So’s endorsement has added fuel and fire to McMullin’s campaign which got off to a poor start when McMullin preferenced his main opponent Robert Doyle ahead of the pack. (See McMullin reconsiders preference recomendation)
Steve Brack’s clearly places the ALP stamp of approval on McMullin’s bid for office ahead of young Will Fowles’ fresh and green team. John So’s approval has given him that extra edge over his other rivals Catherine Ng and Garry Singer putting McMullin back into contention for a possible win.