Melbourne City Council plans to install a 300 metre section of St Kilda Road Separated bike path against the advice of its own engineers. The bike separation design is similar to the design of the LaTrobe Street bike lane that was installed last month.

The proposed lane design will force motorists to park on the outside of the bike lane 3 meters from the footpath creating a major risk to pedestrian and motorist safety. 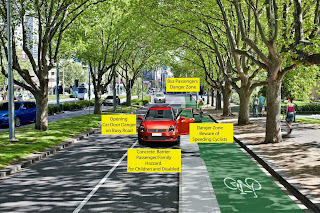 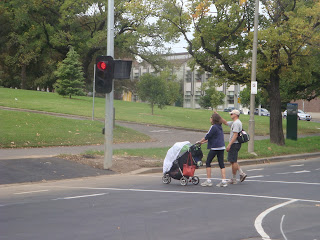 The proposed “island of danger” separation barrier will be installed in the south bound location between Princes Bridge and Linlithgow  Avenue south of the Floral Clock. Beyond Linlithgow Avenue the bike lane will revert back into the standard bike lane design adding to confusion and road safety concerns.

Melbourne City Council Traffic Engineers prefer to install a line-marked lane only without the inside dangerous separation barrier but have been overridden by Engineering Services Manager Geoff Robertson.   City Council Traffic Engineers sight the successful design of the Claredon Street East Melbourne bike lane where the width of the bike lane is such that bikes travel outside of the car door opening zone.  A line painted only bike lane is significantly cheaper than teh ocst of a physical lane separation and would allow the Council to extend the lane beyond Linlithgow Avenue, It also allows emergency vehicles unimpeded access.

Melbourne City Council is under fire over it implementation of its Bicycle Network. The $2.6 Million Latrobe Street experiment is considered to be a complete disaster with the Council now having to remove on-street car parking which has since been found to be unsafe.

The current City Council has never considered or approved the proposed design in open committee. Stakeholders have been denied the opportunity to have their concerns heard.

The Chairman of the City Council’s Governance and Finance Portfolio and Deputy Chair of Planning, Stephen Mayne (who campaigned on open transparency governance platform) has refused to subject the proposed development of a review process. Councillor Mayne is oblivious to the extravagant waste preferring to ignore the professional advise of the City Engineers and instead action the advise of a rouge manager in order to please the Green Councillors who have placed Cyclists interests ahead of public safety concerns of commuters and pedestrians

Councillor Richard Foster has expressed concern and opposition to the St Kilda Rd development by has been railroad by the Greens and  the Lord Mayor Robert Doyle into remaining silent. Councillor Foster wants the development referred to open Council Committee to allow Council to consider the opinions of all stakeholders and the pros and cons of the various designs.