Melbourne City Council has come under attack over its budget and division within the Council Chamber have become more apparent. The City of Melbourne is faced with a blow out in its financial position following John So wild unchecked spending spree. Now the roost has come home and John So must cut expenditure to pay for the party.

Exact details of the report have been kept secret and away from ratepayers prying eyes. It is understood that the report has recommend major cuts in staff and expenditure, expected to generate up to 10 million dollars in savings, by cutting the fat.

The Council bureaucracy under John so has gotten fat and its now time for a crash diet and exercise to trim the fat.

The Council’s governance department in particular has come under scrutiny with the report identifying that some staff were employed, but were not really sure as to what their job entailed. The City Council had gone through a fast pace staffing growth spurt with senior executives redesigning their jobs to suit their life-style as opposed to the needs of the organization.

How the media preceived the So budget.

LORD Mayor John So is swinging an axe over his staff, admitting a Melbourne City Council budget black hole will result in cuts.

The admission could put Cr So under investigation, with his comments potentially breaking a confidentiality agreement. 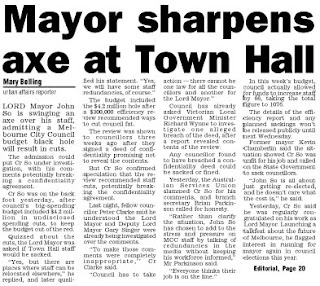 Cr So was on the back foot yesterday, after council’s big-spending budget included $4.2 million in undisclosed spending cuts, to keep the budget out of the red.

Quizzed about the cuts, the Lord Mayor was asked if Town Hall staff would be sacked.

“Yes, but there are places where staff can be relocated elsewhere,” he replied, and later qualified his statement. “Yes, we will have some staff redundancies, of course.”

The budget included the $4.2 million hole after a $300,000 efficiency review recommended ways to cut council fat.

The review was shown to councillors three weeks ago after they signed a deed of confidentiality promising not to reveal the contents.

But Cr So confirmed speculation that the review recommended staff cuts, potentially breaking the confidentiality agreement. 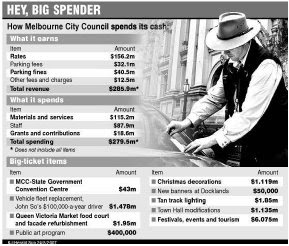 “To make those comments were completely inappropriate,” Cr Clarke said.

“Council has to take action — there cannot be one law for all the councillors and another for the Lord Mayor.”

Council has already asked Victorian Local Government Minister Richard Wynne to investigate one alleged breach of the deed, after a report revealed contents of the review.

Any councillor found to have breached a confidentiality deed could be sacked or fined.

Yesterday, the Australian Services Union slammed Cr So for his comments, and branch secretary Brian Parkinson called for honesty.

“Rather than clarify the situation, John So has chosen to add to the stress and pressure on MCC staff by talking of redundancies in the media without keeping his workforce informed,” Mr Parkinson said.

“Everyone thinks their job is on the line.”

In this week’s budget, council actually allowed for funds to increase staff by 66, taking the total figure to 1076.

The details of the efficiency report and any planned sackings won’t be released publicly until next Wednesday.

Former mayor Kevin Chamberlin said the situation showed Cr So was unfit for his job and called on the State Government to sack councillors.

“John So is all about just getting re-elected, and he doesn’t care what the cost is,” he said.

Yesterday, Cr So said he was regularly congratulated on his work as Lord Mayor. Launching a talkfest about the future of Melbourne, he flagged interest in running for mayor again in council elections this year.

Rare revolt on budget as So confirms job cuts ahead
The Age May 24, 2007

Other Links:
Cash woes send council running to the meters
As you spend, So shall you reap?
Budget blow-out a ‘turn on’ for media man So
Council stamps feet over post office rent

A LACK of transparency and a “frivolous” plan to light the Tan running track around the Royal Botanic Gardens were the “last straw” for Melbourne City Council’s finance chairman Brian Shanahan. 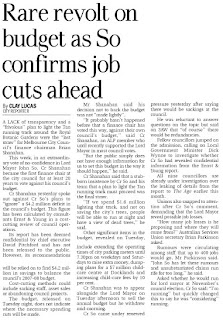 This week, in an extraordinary vote of no-confidence in Lord Mayor John So, Cr Shanahan became the first finance chair at the city council for at least 20 years to vote against his council’s budget.

Cr Shanahan yesterday spoke out against Cr So’s plans to “ignore” a $4.2 million deficit in the council’s budget. This figure has been calculated by consultants Ernst & Young in a cost-cutting review of council operations.

Its report has been deemed confidential by chief executive David Pitchford and has not been released to the public. However, its recommendations will be relied on to find $4.2 million in savings to balance the council’s 2007-08 budget.

The budget, released on Tuesday night, does not indicate where the necessary spending cuts will be made.

Mr Shanahan said his decision not to back the budget was not “made lightly”.

“It probably hasn’t happened before that a finance chair has voted this way, against their own council’s budget,” said Cr Shanahan, an ALP member who until recently supported the Lord Mayor in most council votes.

“But the public simply does not have enough information for us to set this budget in the way it should happen,” he said.

Cr Shanahan said that a stubborn insistence by Cr So and his team that a plan to light the Tan running track must proceed was the final straw.

“If we spend $1.6 million lighting that track, and not on saving the city’s trees, people will be able to run at night and have a view of dead trees,” he said.

Other significant items in the budget, revealed on Tuesday, include extending the operating times of city parking meters until 7.30pm on weekdays and Saturdays to raise extra money, dumping plans for a $7 million child-care centre at Docklands and increasing child-care fees by 10 per cent.

Cr Shanahan was to appear alongside the Lord Mayor on Tuesday afternoon to sell the annual budget but he withdrew mid-morning.

Cr So came under renewed pressure yesterday after saying there would be sackings at the council.

He was reluctant to answer questions on the topic but said on 3AW that “of course” there would be redundancies.

Fellow councillors jumped on the admission, calling on Local Government Minister Dick Wynne to investigate whether Cr So had revealed confidential information from the Ernst & Young report.

All nine councillors are already under investigation over the leaking of details from the report to The Age earlier this month.

“How many job losses is he proposing and where they will come from?” Australian Services Union secretary Brian Parkinson asked.

Rumours were circulating among staff that up to 400 jobs would go, Mr Parkinson said. “John So has let these rumours and unsubstantiated claims run rife for too long,” he said.

Asked whether he would run for lord mayor at November’s council election, Cr So said: “I’m running” but quickly changed this to say he was “considering” running.