Why do we continue to use the “Droop quota” and in the process disenfranchise a significant percentage of voters?

In the past the adoption of the Droop quota allowed us to reach a conclusion in the count without having to distribute preferences to the Nth degree and count every vote.  However with the use of computer based technology this justification no longer applies.

By calculating the quota to be “x(/y+1)-1”, as defined by Droop, we are ignoring up to a quota of  voters which results in a large percentage of votes being locked up in what is referred to as the “wasted quota”.

The effect of the Droop quota can be  seen clearly by analyzing the 2012 City of Melbourne Council vote.  In this case Team Doyle received around 38% of the vote and elected 3 positions with 8% of voters (Team Doyle’s surplus) was ignored.

Why should Team Doyle’s voters be disenfranchised and ignored by being lockup in the discarded quota, why should not the system be fully proportional and each vote of equal value.  The current system using the Droop Quota at best can only be described as semi proportional.

The system using the Droop quota becomes even more distorted under the Victorian Local Government count-back rules as the vote that has been left on the table is not taken into account when calculating who or which candidate fills the casual vacancy.

The Victorian State Parliament Electoral Matters Committee to date has not scheduled a review of the Local Government elections, it is unclear if they will even though it is within their terms of references and they have an obligation to do so.

Will the Melbourne City Council take up this issue?    Most likely not.  The Greens benefited from the distortion in the proportionality of the count so they will not see any benefit in reform.  The only team that did not was Team Doyle and Kevin Chamberlin. But the principle is clear if you believe in proportional representation then all votes should carry equal weight x/y is the purest means of calculating a quota not x/(y+1)-1 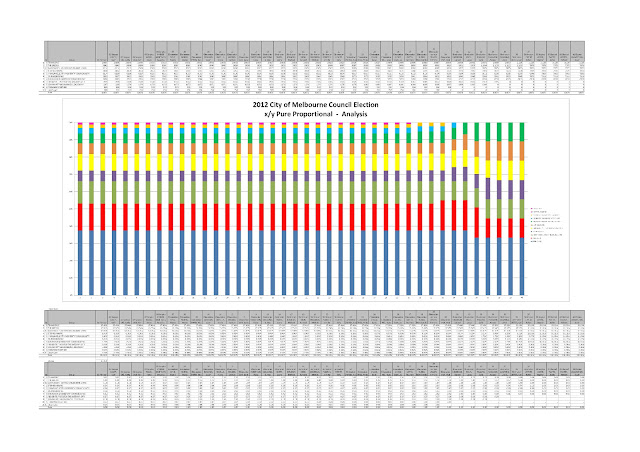