War of words and a free plug for Catherine Ng.

The Age newspaper published yesterday a free campaign plug for Catherine Ng who has falsely claimed that her opponents had initiated a google cyber attack against her site.

Catherine Ng’s claims are another example of the false and misleading statements of wrong doing that is being pumped out by her campaign director Ian Hanke – The Liberal Party “Spin doctor” who promoted the “Children Overboard” lie used to win votes for John Howard in 2004.

The Age, keen to promote Catherine Ng and cash in on the false and misleading statements, demonstrated an alarming lack of professionalism and bias in its reporting. If you look closely at the Google screen shot shown in the Age article you will notice on the right had side (slightly obscured) an ad placed by Gary Singer. The Age had deliberately sought to crop that out from the photo.

Catherine Ng’s spin masters tired to make our and imply that there was some of hanke panky going on in cyberspace. The only Hanke panky is coming from Catherine Ng herself. So desperate is Catherine Ng to seek headlines and attract media attention to her campaign that she has stooped to making false claims. There is nothing wrong or underhanded in a person buying advertising space on the Internet. in fact is is very much apart of the free market economy and a open democratic society.

Gary Singer, Catherine Ng’s running mate, admitted that he also had brought Google advertising space to promote for his campaign.

It should also be noted that both Ng and Singer also have placed ads using Google keywords. 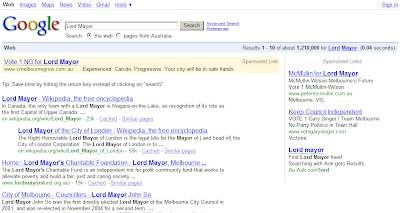 Contrary to the statements published in the Age article hotlinks to Catherine Ng and Gary Singer’s web sites appear more regularly then they do for Peter McMullin who has been the target of envy, dirty ticks and lies by the Singer and Ng camps.

A simple Google search on the keyword “Lord Mayor” shows that all three candidates appear in the Google hot links page, proving that the statements made by both Ng and Singer that their ads only appear when you do a Google on their names are false.

Cr Singer has an ad on Google. But like Cr Ng’s, his ad only appears when his name is typed.