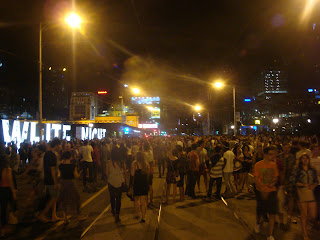 White Nights in Melbourne was successful entertainment yet a disaster in planning and management. It lacked professional organization. Which on one hand added to its appeal and on the other placed considerable risk to public safety.

There is no doubt that Melbourne loves free public events and White nights was no exception.

The weather was good and the event draw a considerable sized crowd. A crowd so big that it was its main concern. There were too many people and the planning of the event, or I should say lack of planning, good design, and management, added to the concern.

Public security was virtually non existent or certainly not up to the task. It was by pure luck, not design, that there was not any major incidents. Had there been the event would have been a catastrophe.

I have had my fair share of organizing Arts Festivals and major events in my time, including a 10,000 attendance at a Crowded House concert the Myer Music Bowl.  One of the things I learned was the need for planning and good security. In a crowd situation things can go wrong and if and when  they do you are looking at potential major problems.

With such a large crowed as there was last night you really need a much bigger police presence.  The intersection of Collins and Swanston Street was the worst problem.  There was not enough consideration given to crowd movement or control . Only 6 police officers and an overstress and ill prepared security team trying to manage the crowd movements as people flowed down Swanston Street expecting there to be more events and entertainment.  With the Trams stopped Swanston Street became a major pedestrian thoroughfare parade.  I know that the event was not supposed to continue along Swanston Street and stopped at  Collins Street but this was part of its problem.  More activities should have been placed along Swantson Street and better management of the festival site security was needed. 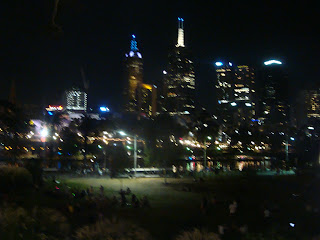 I spoke to a senior police office and he also agreed that security and policing was under resourced and public safety, unbeknown to those who attended the event, was at risk.  There should have been much more thought given to supporting events and other such activities.

There was a lack of toilet facilities and the event should have provided more Street stalls and food vendors.  These could have been placed in Swanston Street which would given that end of the Street some focus.

Putting aside concerns of planning and management the event was a success of soughts, although I still do not know how much it cost.

The event certainly improved later on in the night when the crowds began to thin-out. 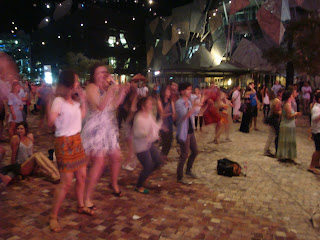 By 2-3AM it was much more enjoyable. there was dancing, live music, light shows and the Art Gallery was open all night.  With a more manageable crowd it was easier to move around and enjoy the activities on offer.

Federation Square was not designed to handle large crowds. In fact it is not suited for them. Police again expressed concern at the lack of planning and emergency access to the Square. If something went wrong then this was not the place to be. It was over packed and I decided to avoid it until the early hours when the crowd numbers dropped.  It did make a good disco techno dance club around 3AM 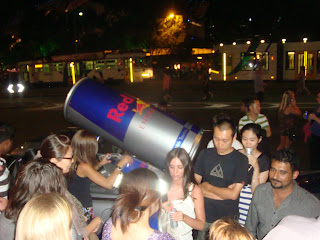 The main concert stage at Flinders Street Station under the Clocks was another one of those successes that was marred by poor design and planning.

The Stage layout could have been better, wider and providing both audience and entertainer with improved viewing angles.The sound quality was also lacking. But the acts were great. for me the best was the SBS Rock Wiz orchestra. I just love James black’s never ending energy and sound. If only a bit more thought went into the design of the stage it would have been a far greater success. I hope to see more use of this site as a public concert venue. 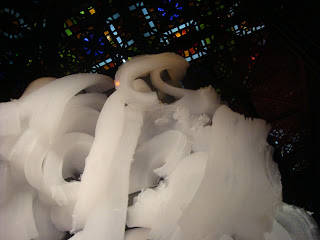 The night time access to the Art Gallery was great as was the cascading soap installation under Leonard French’s Stain glass ceiling.  I did not get to see it perform early in the night, again the crowds were to much, but late at night visitors were able to soak up its atmosphere.

I could not help but think that the White Nights Festival would have been better had it been incorporated into  Moomba and was better resourced and planned. But than this also added to its success in its own way but the risk was just too great.

Thankfully there were no major incidents, The intersection of Collins and Swanston Street, the lack of supporting activities such as food vendors, poor security, design and management and the overcrowding need to be addressed.

Had something gone wrong it would have resembled a disaster zone more akin to a Russian meteorite crash than an Arts Festival.