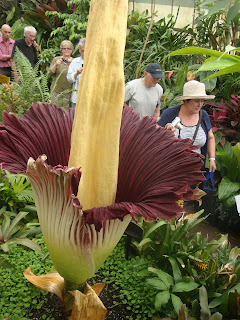 The flowering of a rare tropical plant Titan Arum in  Melbourne’s Botanic Gardens was truly an all inspiring event. 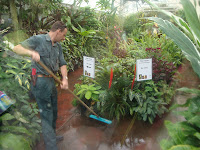 The staff at Melbourne’s Botanic Gardens deserve praise for their professional skills and efforts in propagating and nurturing this rare magnificent tropical plant and displaying it to the public.  Raised from a seed given to Sydney and Melbourne Botanic Gardens by David Attenborough (How he manged to get it by customs is any ones guess). 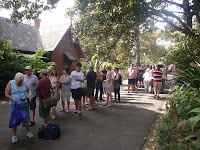 People stood in line for up to three hours on December 26 to see this magnificent flower, nature at its grandest. The queue stretching outside the Botanic Gardens Gate E back towards Gate D (Some 300 meters or more in length). 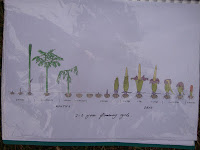 Raised from seedling to tuba to leaf then flower the Melbourne Titan Arum pollen has been harvested to hopefully be used to propagate flowers in the future.  The life span of the flower is a long journey spanning over 7 years. If pollinated it takes a further nine months to bear fruit 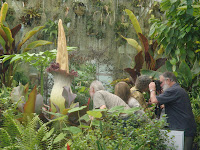 Today a team of Botanist and Scientists harvested the flower’s pollen as the flower begins to wilt. The pollen will be frozen and used to fertilize anther plant which will hopefully bear fruit and a new generation of Titan Arum   (What is not known to most members of the public is that there is a second Titan Arum ready to flower but sadly not on public view.  The pollen from this flower might be used to try and germinate the second flower – Hopefully they will be successful) 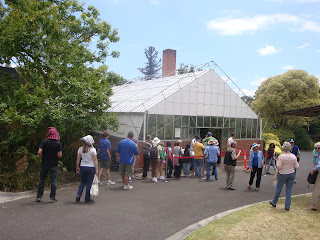 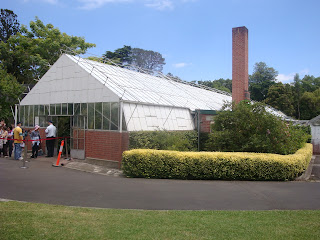 The main disappointment was the Glass house itself.

Melbourne’s Botanic Gardens Tropical Plant Glass House has little to desire. It is small outdated and poorly designed.  It is events such as the flowering of this rare plant that members of the public become aware how much Melbourne and our vistors are missing out.

The management of the Royal Botanic Gardens would very much like to build a new world class hot house, one that would allow the propagation, cultivation and display of tropical plants in a better environment. Richmond/Kew in Southwest London, UK and the Glass house in Munich are good examples that Melbourne should aspire towards constructing.  A good design would facilitate better access, environmental efficiency and better management.  The cost of building a new Glass House is estimated at between 2.5 to 5 million dollars.  Money that would be well spent if the design is right. Personally I think Melbourne should look at building a world class winter garden and tropical glass house on the scale of the Princess of Wales Conservatory. Sadly the RBG has not included such a facility in its Garden’s Master Plan. It should.