Melbourne City Council Chief Executive Officer, David Pitchford, has called for a ministerial inquiry into what he alleges is a branch of confidentiality under the provisions of the Victorian local Government act.

Earlier the Melbourne City Council had received a $300,000 efficiency report from experts Earnst and Young consultants.

Reports in the media, earier this month, have given rise for concern by the David Pitchford, Melbourne’s CEO, that Council’s right to confidentiality had been breached.

David Pitchford in his report to Tuesday’s Council meeting, which was brought forward one week in order to discuss issues related to Council finances, had expressed concern that:-

An article on the front page of The Age newspaper on 9 May 2007 (See insert), there are a number of quotes and assertions made by the journalist which could imply that one or more Councillors had possibly breached Section 77 (1) of the Act. 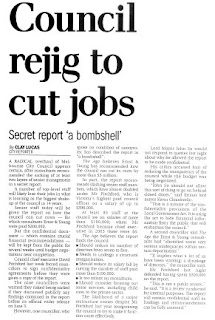 Mr Pitchford is apparently of the belief that such benign words constitutes a possible breach of the local government act that also imposed sever penalties including dismissal of Councillors should they be found guilty of breaching the provision of the local governement act.

Guilty of what? Discussing the issues confronting Councils budget and finances in general terms in the course of public debate.

The report to Council made no mention of the fact that the Lord Mayor, John So had just yesterday made mention of details of information contained in the report that Council want hidden, leaving the question is the CEO being a tad bias and overreacting by seeking to intimidate the Council for passing general comment on a document that is in the public interest and should be made public.

The following is a transcript of John So on Melbourne Radio 3AW. I leave iot upt to you to read and decide. Does John So really know anything about budgets and fiscal policy?