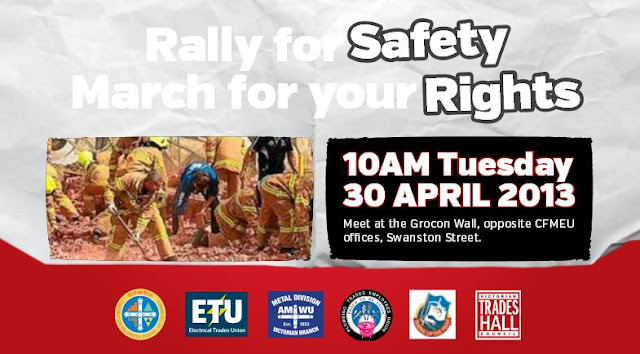 The CFMEU (Construction Forestry Mining Employees Union) and Victoria’s Trade Unions will be marching next Tuesday April 30 in support of Safety on Melbourne’s Building sites.  The  march begins at Trades Hall in Victoria Street,  and will proceed to the Swanston Street site of last month’s tragedy for a minute’s silence as a sign of respect.outside the GroCon CUB building site on Swanston Street.

The City of Melbourne still has not provided information why it had not issued a permit or inspected  the building site hoarding which collapsed on March 28.killing three innocent pedestrians. 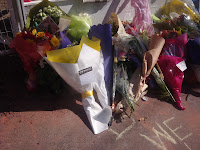 Councillor Stephen Mayne, Chairman of the Council’s Finance and Governance portfolio, was unable to answer questions from the public last week if the City of Melbourne had issued a permit for the new hoarding or if it had inspected the site and if not why not?

The City of Melbourne continues to shift blame and avoid accountability for for its own failings. Public Safety is the prime directive and obligation of the City Council. Stephen Mayne describing public concerns about safety on the GroCon site as “Grandstanding”