Two years ago I had the pleasure of watching Alexandr Dolgopolov, a young 22 year-old Ukrainian Tennis Player, play in the Australian Open qualifying matches. It was an exciting match (I always enjoy watching the qualifying matches its something really special). Dolgopolov match stood-out at the time. He showed strength and determination. 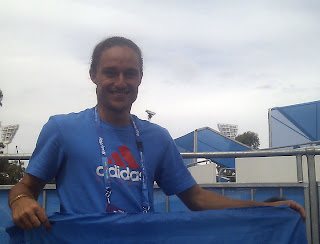 Today Dogopolov, 24, is seeded in the top 20 of players. No longer does he need to play qualifying matches. Last year he progressed to the Australian Open semi finals . This year he is listed as one to watch as his game goes from strength to strength. He has already began to build up a sizable team of managers, coaches support staff and hanger-ons as he moves up in ranking.  We managed to catch up with him and his team during today’s qualifying match between Adrian Menendez-Maceiras (ESP) and Denys Molchanov (UKR).

We look forward to watching Alexandr during the 2013 Australian Open tournament and wish him and all the other players all the best. Viva Ukrainia.