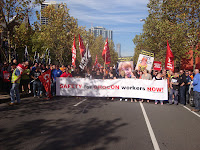 Some 8,000 to 10,000 Trade Unionists and members of the public marched in solidarity for public and workplace safety.

The Union rally follows on from four deaths associated with GroCon buildings sites in Melbourne. One Worker who fell from a construction site crane and three innocent pedestrians who were killed when a hoarding and brick wall collapsed on March 28. 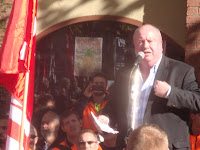 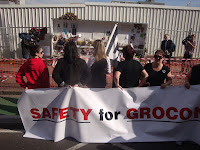 Whilst the main focus was on GroCon and the State Government Work Safety questions are being asked as to the City of Melbourne’s responsibility and why it failed to issued a permit or inspect the Swanston Street building site?

The City of Melbourne needs to undertake an internal review of its role in the tragic events and its statutory obligations. 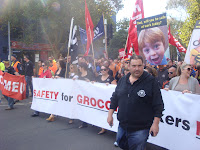 The media are also asking questions but the Council has gone underground refusing to answer, hoping to weather the storm and escape attention from three government inquiries.  Worksafe, the Buildling Industry and  a Coronal inquiry.

There is a need for a fourth Statutory compliance and review which must look closely at the role of the City of Melbourne in overseeing Construction site public safety. 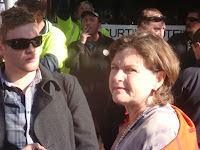 The City of Melbourne has a whole department of Engineers and exactly what do they do other then Engineer congestion, attend seminars and drink coffee? If they are not providing oversight, inspection and enforcing the rules why are they employed? Why are rate payers paying their wages?

The Union movement plans further rallies should the government inquires seek to scape goat or fail to hold to account those responsible.  This includes the City of Melbourne and the State Government