UPDATE: (December 1 17:00) There was some residual counting left over from yesterday and Thornley has taken the lead once again as the three main players race to the finish line. Its neck and neck and anyone can come out of this race the winner.

People Power had just been eliminated and they top up the Democrats who are marginally below Family First.

The Democrats votes flow to the Greens who on the Democrats ticket first preferences cross the line with minimal surplus. (This is the segmentation order at play) The Democrats still have another 4,387 votes to distribute (that came to it as second preferences + their below the line volts to their lower candidates). The Green surplus (256 votes) is then distributed to the ALP.

The Democrats remaining votes are then distributed to the ALP pushing Thornley over the line a head of Southwick. with a margin of less then 20 votes.

You begin to see how close this race is. Those 20 could easily disappear in the exhausted pile or drift from the below the line voters. The Democrats and People Power preferences are keeping the Greens in the race but Labor and the Liberals are catching up fast. 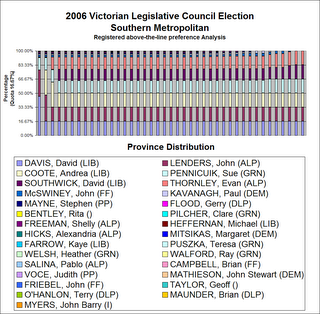 (November 30: 1700) Latest election counting has put David Southwick in the lead for the fifth spot in Southern Metropolitan: shattering ALP dot com millionaire Even Thornley’s hopes of entering parliament and with t the ALP’s dominance of both houses.

The long expected 7000 + postal votes have been counted and Southwick has received the lions share. It’s literally with 0.04% less then 150 votes.

This will certainly go to a recount and may even go to court. There were a number of irregularities in the count with the Victorian Electoral Commissioner refusing to provide detailed information relevant to the conduct of the election. This would have to be one of the worst conducted counts in recent memory.

Already questions are being asked on a number of issues. The main issue appears dissatisfaction with the ALP decision to preselect a candidate in Western Metropolitan with close ties to Syria which has alienated Melbourne’s Jewish Community who in turn dumped the ALP and voted on mass for the Liberal Party.

With the adoption of optional preferential voting Labor’s fortune are expected to decline even further as many of the Green votes are expected to exhaust reducing Evans chance with them.

Andrew Landeryou has posted on the Other Cheek a real possibility that if the vote continues to unfold as it has in the last 24hrs ,where the Greens have been losing ground, there is realistic possibility that Evan Thornley could overtake the Greens and be elected on the back of a small surplus delivered to the ALP but the Liberal Party.

For each vote added to the table the quota changes. 2/3rds of each vote is absorbed in the existing four quotas.

Problem is we do not know how many ballot papers have been issued. We tried to get this information from the VEC but the Chief Electoral Commission was unable to unwilling to provide any statistics on the number of postal votes that had been issued. This information is normally readily available but for some reason Steve Tully refused to provide the data prior to Saturday’s poll.

As a result it is difficult to ascertain. Certainly if there are more votes to be counted and the Greens percentage is declining then YES the Greens could lose out and could fall below Evan Thornley in which case Evan will cross the line first. Again its like walking around in the fog without necessary information. Another issue that needs to be examined is the impact of optional preferential voting. I am waiting to hear feedback from Scrutineers. Hopefully they will be able to secure a copy of the preference data file because without that there is no way they can properly scrutinise the election in this round without it. again this information use to be made available but Mr Tully has to date refused to make it available. With this election being close he will have to reconsider or face a court challenge.