Under the reform introduced by the Brack’s State Government – Victoria’s Legislative Council (Upper House) will be elected by a multi-member proportional representation system similar to the system used to elect the Australian Senate. Whilst this overall is a step in the right direction and long overdue there are a number of disappointing aspects to the outcome and details of its implementation.

City Melbourne split with the Yarra River continuing to be point of division. 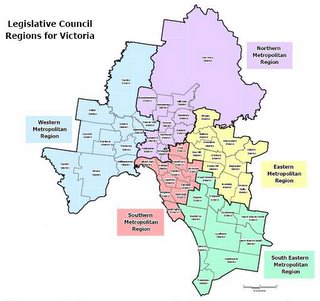 The City of Melbourne once again will be divided into numerous State Electorates with the Yarra River being a point of division not unification.

Disappointingly the VEC commission considered in their wisdom the Yarra River to be a dividing line as opposed to a focus of unity.

The newly created electorates fan out from the Melbourne Port Philip Bay area to the outer suburbs ignoring basic community of interest criteria lumping inner urban and outer suburban electorates together. Melbourne Province prior to 1988 crossed the Yarra and encompassed the electorates of Prahran, Albert Park, Richmond and Melbourne- the Yarra River being a central focus of the electorate. Not a word or an utterance by the City Council who failed to make a submission or express a view on the proposed boundaries. They could have advocated that the Commission seek to ensure that the City of Melbourne was incorporated into a single electorate instead of being divided. Melbourne has more in common with Albert Park and Prahran then it does with Yan Yean, Mill Park or Ivanhoe.

One of the models under review in the 1990’s when the ALP first seriously considered the issue of reform of the Upper House, as opposed to its previous policy of abolition, was to divide the State into five electoral regions. (Two rural and three inner-urban. This model would have provided a Legislative Council based on a 5 x 7 member with a quota of 12.5% or a 5 x 9 member on 10% quota.)

This model overall would have produced a better outcome then what is currently in place.

It would have required a reduction in the number of Lower House seats from 88 seats to either 85 or 75 seats.

The main advantage of the five district model was that it facilitated a better community of interest makeup then what is currently in place. With the Yarra river being a point of unification and not division.

Other issues of concern relate to the method used to elect representatives. The method of election is similar to that used to elect the Senate and some local councils, including the City of Melbourne.

One of the problems with the current system is that the method used to calculate the proportional transfer of votes seriously distorts the one-vote one-value principle. The system currently used increases the value of major parties vote whilst devaluing votes for minor candidates. This can and will effect the outcome of the election.

The state government is aware of this deficiency in the adopted system. The change required to fix it is minimal. Instead of calculating the proportional value based on the number of ballot papers it should be calculated on the allocated value of the ballot paper being transferred.

The Senate system also needs to be reviewed. The problem with the Senate system is it uses the same value distorting formula. The main difference between the Senate and Legislative Council and local government (including the City of Melbourne) is that the effect of this distortion is magnified in smaller based electorates where a lessor number of votes can determine the final outcome.

We need to ask ourselves what is more important? A system based on the principle of one-vote on-value or a system designed to standardise and ease the method of manual counting of the vote?

The fact is that the counting of the election will not be done manually but by computers. As such we should modify the system used to ensure that all votes are equal in value.

Being interested in electoral reform we thought it would be of some general interest and value to do an analysis of the 2004 Victorian Senate vote as it would apply to the new Legislative Council boundaries.

We chose the Senate because it provides an opportunity to access the relative strength of all the main political parties who nominated candidates for the Senate (The National Party had a joint ticket with the Liberal Party). This analysis is not 100% accurate as the preference negotiations and registered party allocations would be significantly different under the new eight electorate model but never the less we consider it worth reflecting on.

In our analysis we allocated and distributed the vote according to the registered “above-the-line” preferences for the 2004 Senate elections. No assessment has been made at this stage to consider the impact of below the line voting (This may effect the outcomes of the last position elected. We are waiting on further information from the Australian Electoral Commission which would enable more detailed analysis to be undertaken.

Based on the 2004 Senate result our analysis indicates that the Liberal/National Party coalition would have obtained an absolute majority (21 out of the 40 members) of the Legislative Council.

Some readers have not understood this fact. I thought that it was pretty obvious in the analysis listed above.

Clearly not to some. If the Liberal/National Party continue to run a joint ticket with the National Party second on their ticket then the National Party would win the second spot as indicated assuming all else is equal. Again This is a preliminary analysis and more detailed analysis is pending receipt of additional information requested by the Australian Electoral Office (Including below the line data).

2 thoughts on “Yarra River point of division not unityCity Council split down the middle. New boundaries ‘Gerrymander’ will hand control to Liberal Party”