It raises some interesting questions but in the process it has also brought into question why the Age had not applied the same standard of questions and inquiry to other candidates? It most certainly has gone light on Robert Doyle who is seen as the favorite and most likely candidate to win the election. Likewise it failed to question the validity of the catch phrase “Keep politics out of politics” as it makes good media copy.

Robert Doyle, former State leader of the Liberal Party, has hardly been seen in this campaign. yet he is expected to win hands down on recognition factor alone. By Contrast Peter McMullin has attended all functions and all public events and by doing so has demonstrated a commitment to Melbourne and the seriousness of the campaign. 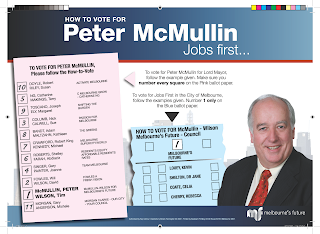 Running as an independent Peter McMullin has put together an impressive bipartisan professional team. His deputy lord mayor candidate Tim Wilson is a prominent conservative member of the Liberal Party and his lead candidate is Lord Mayor, John So’s former chief of staff, Kevin Louey.

Peter McMullin, like other candidates who are seeking election, is also a long standing member of a political party – The Australian Labor Party (something he has not tried to hide).

The Australian Labor Party, along with the Liberal Party, have not endorsed candidates for the City Council election, yet Peter McMullin is coping flack for his party membership even though he is running unendorsed as an independent using his own resources and money.

The fact that McMullin’s team is bipartisan gives testament to the level of his independence from party politics.

The only political party that has endorsed candidates for election is the Greens. So why is it that Peter McMullin is the only one that comes under the spot light for his party membership?

As to the question of his wealth there are others running in the Council election who are much more wealthy then McMullin. Will Fowles, Gary Morgan, Nick Columb all have a few grand to throw away. The direct election model is expensive and without party backing someone has to pay the bills. The Greens have their party machine and a pool of cash handed them by the Government. Yes McMullin is not the ideal choice but in comparison he is the best of a bad lot.

The answer to the question of why has the Age gone light on other candidates? Who is paying Catherine Ng’s bills? The answer to the Age go easy policy of support might be found in the fact that Catherine Ng has a very expensive graphic paid advertisment published on the Age online -displayed very prominently on the same page as the article in question. (Update: The Age has now removed Catherine Ng’s ad which was displayed until 12:00 noon on Sunday)

McMullin firms for lord mayor role, but is he a little bit stale?
The Sunday Age

NEXT Sunday Melbourne will have a new lord mayor. There’s barely a political commentator in the state brave enough to predict the winner – the city’s electoral system is too quirky and the preference flows too unpredictable. But yesterday the bookie’s favourite was a man called Peter McMullin.

So, who is Peter McMullin and what sort of lord mayor would he make?
…

McMullin has also secured two important endorsements, one from former premier Steve Bracks, who said he “couldn’t think of a better person” to be the city’s next mayor, and the other from Lord Mayor John So, who described McMullin as “someone I have always held in the highest regard”.