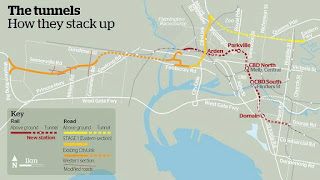 The often talked about, Melbourne Metro underground extension is one of those top end pipe dream infrastructure projects that should help transport Melbourne into the future.

The project is estimated to costs anywhere between 9 to 12 billion dollars and will link South Yarra to Kensington via the Domain. CDB and Parkville

The project is it proceeds will involve an estimated one year disruption to Swanston Street trashing the $25.6 Million that the City of Melbourne has spent over the last year  not to mention the money spent on upgrading the Domain interchange. 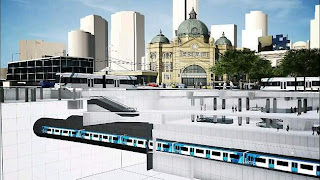 With the project comes opportunity for better services and integrated planning.  The owners of the Swanston Street CUB site should be planing to allow for integration of the proposed North Metro station providing direct access into their development  with the possibility of additional below ground shops.  the more we can integrate public infrastructure into retail shopping the better off both will be.  Similar opportunities exist in developing the Flinders Street station and its integration with Federation Square

Missing from the bigger picture is how the long talked about Eastern Freeway corridor rail line will interface into the new network if at all.  And which route the long waited Airport rail link will take.  This tunnel could be a busy rail hub after all.  We just hope they have got the planning it right this time unlike the lack of long term planning when they built the Melbourne underground rail loop .

The other issue effecting our rail network is the removal of level crossings. Crossings that limit the number and frequency of trains in Melbourne.  The impact that level crossing have to the overall performance and functioning of Melbourne transport system can not be overstated.  These projects also should be on the drawing board and private investment funding sought. There is an opportunity here to integrated commercial shopping centres into new underground passage and freeing up of land utilization.

Visionaries, like Darebin’s Mayor Tim Lawrence, are keen for State Government to invest in outer Melbourne’s future by supporting redevelopment along the Bell Street corridors.  If this was attended to then a large tracks of road and rail development and commercial infrastructure could  be freed up to help stem the pressure on Melbourne’s ever expanding  urban sprawl and road network congestion.   Similar opportunities exist on the Dandenong-Frankston lines. Removing level crossings on major roads should be given equal if not higher priority.  Local Councils should be allowed to independently pursue redevelopment finance proposals to remove level crossings capitalizing on the land, rail and commercial development integration to the benefit of their local communities.