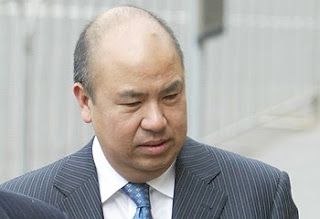 Peter McMullin, who held the position of Deputy Lord Mayor for one year in 1996 before being replaced by Liberal Candidate Clem Newton-Brown has sided with his old enemy’s team in a second attempt to win the keys to the Lord Mayor’s Limo.

McMullin, a known Maoist and supporter of the PLO and anti-zionist, stood against John So in 2001.

Having failed to be re-elected to the City Council in 1999 and also in his bid to become Lord Mayor in 2001, Peter McMullin moved to Geelong where he hoped he would secure ALP endorsement for the Federal Seat of Corangamite. McMullin failed to win pre-selection of the outer Geelonmg Seat and is now seeking a comeback fight for the City’s top job.

Members of the ALPs influential Emily’s List would no doubt be disappointed in Peter McMullin failure to support a female candidate for the Deputy’s Position. Instead of choosing an ALP Women Candidate. A decision that will work against McMullen’s campaign.

Kevin Louey has come under fire for his frequent visits to China, mostly paid for by the City of Melbourne or donated by the Chinese Government. Mr L0uey has been criticised for using ratepayer funded visits to China to further his own personal and business interests.

The McMullin/Louey team has placed at odds Catherine Ng who had indicated that she will also be seeking election for the Position of Lord Mayor,

Catherine Ng was John So’s number one Council ticket candidate in 2001 and 2004. Councillor Ng has been John So’s strongest performer on the City Council. The fact that Kevin Louey is seeking to hold on to the perks and lurks of Town hall has placed Catherine Ng at odds with John So and his chief of staff.

Peter McMillan’s bid for a second shot will give a leg up to former Liberal Party State Leader, Robert Doyle who has also indicated his intention to run for Melbourne’s Lord Mayor race.

Robert Doyle has a impressive resume and would be seen to be the favorite in what is shaping to be a Melbourne cup field of candidates.

Update: The horses and jockeys for the Lord mayors Race have been spooked. There is a suggestion that Peter McMullin may try and rerun with his former running mate ABC Journalist Elaine Canty with Kevin Louey relegated to his number one Council ticket position. Peter Mullin campaign continues to publish false and misleading assertions that Peter McMullin was deputy Lord Mayor between 1996 and 1999. The fact is Mcmullin retained the Deputy Lord Mayor’s position for only one out of a three-year-term of office. He was replaced by Lorna Hannon and Clem Newton-Brown amidst overwhelming community opposition and resentment to his about face policy of appeasement to Jeff Kennetts vision for Melbourne and the siting of the Melbourne Museum in the Carlton Gardens. Peter McMullin was unsuccessful in his bid to be reelected in 1999 and failed to in his challenge against John So in 2001. Elaine Canty was Peter McMullin’s running mate back in 2001.