What Faine failed to address was the issue of a Greater Melbourne and the need for the City Council boundaries to be expanded. Nor did he take talk back calls as he promised. Confusion arises when Doyle and other public figures talk about Melbourne. Robert Doyle was not elected to represent the interests of the broader Melbourne community, he only represents 50-60,000 inner city resident’s and businesses. 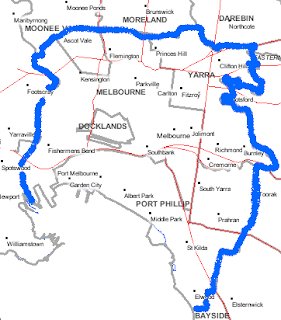 The Government and the City Council must embrace a Greater Melbourne model along the lines of Brisbane and the Greater City of London, taking in the boundaries of the state seats of Albert Park, Prahran, Richmond and Melbourne, all of which has a common community of interest of inner city development as advocated by the Lord Mayor. If we are going to plan for the future then it must be on a regional basis.

Issues of regional planing and governance, scale of efficiency and sustainability – all demand a Greater Melbourne spanning from the Banks of the Yarra Up through Prahran including St Kilda and the Bayside back to the Yarra and along the Maribyrnong River to Flemington, Kensington, North Melbourne Parkville, reuniting North and South Carlton , across to Clifton Hill and then along the Yarra Park heading back to Herring Island.

Melbourne City Council is one of the richest and smallest municipalities in Victoria. It was cut down to size by the previous Liberal Kennett Government, which Robert Doyle as the Member for Malvern was very much a part of.

Jon Faine should have raised the Greater Melbourne issue with Robert Doyle and asked him what his policies are on the expansion of Melbourne City Councils boundaries. Instead of taking talk back calls questioning Robert Doyle’s statement of Faine, who is a self confessed thief in his youth, went on to vilify Students of Xavier College who were caught out shop lifting whilst on a Ski Trip in New Zealand – falling short of naming the students involved. Whilst this issue may have warrants listing in the newspapers it did not warrant public discussion on talk back radio. Somehow listeners were left with the feeling that Jon Faine was harbouring a vendetta and restfulness towards Melbourne’s private schools. Jon Faine as a past lawyer and civil advocate should have known better then to have exposed this issue to undue public attention.

Faine was also quick to comment that the Federal Elections campaign was off to a slow start even though it does not officially state until later today when the writs are issued. Like many in the media they seam to think that their Job in the federal election is to cover it with ridicule and scorn.

I first met Jon Faine back in 1979/80 when he defended a group of squatters in Toorak and again when he worked for the Fitzroy Legal Service. Jon was a champion for civil liberties and a reformer.

Faine of late has lost the plot, he really should be looking at finding a new gig, having been in his current position for over 17 years. He sounds more like the weather man and traffic reporter repeating the same news that is already published in the media. He sounds borded and has become part of the system, another worn-out cog in the machine that he once wanted to reform. After a while it becomes easier to go though the motions following the same road map as the day before and performing the same duties as every other talk-back presenter. He is not the Jon Faine I first met and who I was inspired by in my youth. I prefer the reformer and civil activist that he once was.

Faine should get out and discover more of the world, head up a civil rights reform organisation or something other than just undertaking a three month long service leave, RACV diving tour from Australia to France.