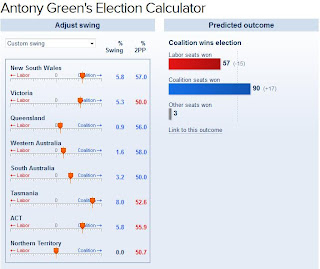 The Greens only won Melbourne in 2010 because the Liberal Party at the time preferenced them ahead of the ALP. A mistake they are unlikely repeat in September.

In 2010 the State Liberal party fearing a backlash from its supporters placed the Greens below the ALP this allowed then State ALP member Browyn Pike to hold on to the State Seat of Melbourne.

LNP supporters will be conscious of this potential outcome and we will most likely see a repeat of the State By-election where LNP voters will fall behind Cath Bowtell in order to prevent the Greens from being re-elected.

All recent  polls including the Essential Research Poll are showing a Statewide drop in Greens support which lends even more to the flaws in Antony Greens Calculations. You can not apply a statewide swing overall to a specific seat such as Melbourne where the 2PP contest is not between the LNP and the ALP.

UPDATE:  It is clear that Antony Green has hard coded in the defeat of  Independent seats as shown by this scenario on his calculator