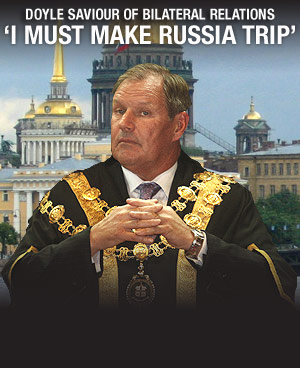 Rob Doyle less then a month in the top job has planned a Junket to St Petersburg. Russia. Whilst St Petersburg is one of Melbourne’s Sister Cities one has to question the merit and benefit of the planned junket.

Ousted Melbourne City Councillor, Fiona Snedden, as part of her farewell world tour visited St Petersburg in May last year. Prior to that Rob’s Deputy, Susan Riley, and disgraced former City Councillor Anthony Nicholson packed in a midnight summers holiday back in 2003-4 costing ratepayers in excess of 20,000 each. Anthony Nicholson was too drunk the night before and missed his plan and had to schedule an alternative flight. The cost of Nicholson’s St Petersburg tour was never “acquitted” and did not show up on the Council’s Travel register or expense statements.

It is unclear as to the reason or benefit of this trip which Robert claims was organised prior to his election. There was no mention of this in Cr Snedden’s report.

The Moscow Embassy is controversial itself and should be seriously reviewed. What does and has Austrade done. the staff at the Moscow office are highly paid and have numerous lurks and perks. they are also responsible for representing Australia throughout Ukraine, Moldova, Georgia and other CIS countries. They never seem to do anything for the other countries where their absence is noted by most Australian’s.

Winter in Russia is not a picnic which begs the question what has Robert Doyle got to offer and contibute that will bring direct benefits to Melbourne?