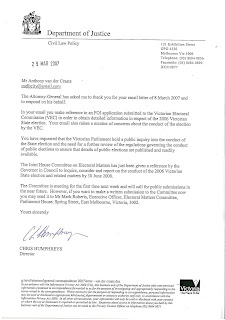 The committee will be calling for written submissions next week and is expected to conclude its enquiry and report back to the State Parliament after June 30, 2007

There are many issues that we have identified in relation to the conduct of the State election not the least issues related to the VEC failure to publish copies of detailed results of the election (Including polling place results for the Victorian Legislative Council – The media will come in for a bit of a serve here).

In addition issues of serious concern in relation to
1) the lack of full certification of software used in the conduct of the election
2) members of the VEC accessing the results of the e-voting centre polling places prior to the close of the poll on Saturday November 25, 2006 in the absence of scrutineers
3) VEC handling of FOI requests
4) review of the Victorian Ombudsman Act in order to ensure that the Ombudsman has jurisdiction over the Victorian Electoral Commission and other issues.

The Parliament is expected to advertise the hearings next week.

No email address have been provided by copies of any submission could be also forward to the Speaker and President of the Parliament House.