Melbourne City Councillors call on the City administration to reinstate publication of the City Council’s Interstate and Overseas Travel Register.

Melbourne City council’s Finance and Corporate Performance committee voted unanimously for the resolution put forward by Councillor Brian Shanahan for the City of Melbourne to reinstate the publication of City Council’s Travel Register. The meeting was attended by all councillors.

The recommendation of the Finance and Corporate Performance Committee will now go to the full Council meeting in December 13, 2005

Under the current terms of reference the City of Melbourne’s Finance and Corporate Services committee can not resolve or act under delegation any issues related to the City Council’s Governance.

Where to from here?

All decisions on Governance must be determined by resolution of the full council. Previously the Finance committee was able to consider and make direct requests on governance issues.

The City Council administration snuck in the changes to the terms of reference of the Finance Committee, at the first meeting of the newly elected Council, removing the direct say and involvement of the committee in the governance of the Council.

The current requirements under the committee’s terms of reference give extra opportunity for the Council administration to seek to undermine the resolve of the Council in what is considered as a seasoned “Yes Minister” ploy. (Reference to a BBC sitcom on Westminster politics)

It seams that supporting argument and discussion have been left out of the minutes (we note that comments submitted to the committee related to Cr Bindley’s overseas African safari and Council’s funding of third party organisations executive expenses has no mention – Did the administration act in good faith and present the comments for consideration – no answers no responce?)

We will have to wait to see the recipe for the pudding before we bring out the plates.

The Travel Register records all staff and councillor overseas and interstate travel and is required to be maintained by the City Council under regulation 11 of the Local Government (General) Regulations 2004. 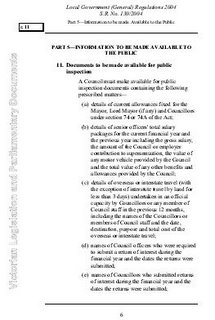 The Travel register is a public document and was previously published and available on the Council’s web site but removed, without consent or authority by the elected council, in what is considered a cynical move by the Council administration in seeking to avoid disclosure and accountability.

The City Council administration have previously acted to avoid publication and accountability for staff travel and we believe they will continue to do so.

Whilst this is a good sign and perceived victory for the push for honest open and transparent governance we will not be celebrating until we see the proof of the pudding.

The silly season in the lead-up to the Christmas and New-Year break is upon us and anything can happen.

Our sources in the City Council Governance Department say that Ms Allison Lyon, Council legal officer, sought to sidetrack the resolve of the Council Committee by making specious claims that the publication of Council’s Travel Register would breach privacy entitlement of Council staff and possible be in beach of staff’s employment contracts.

Allison Lyons has spent thousands of dollars of limited Council resources in her on going attempt to avoid open disclosure of this information and public accountability.

The Travel Register is a public document required by regulation to be accessible and open to the public.

The information recorded on the Travel Register is not private information. It is the detailed costs to ratepayers associated with Councillor and staff interstate and overseas travel. All staff employment contracts are, supposedly, in accordance and fulfilment of the requirements outline in the Victorian Local Government Act and its regulation.

Given that the City of Melbourne has a large number of interstate and overseas investors with a stake-holder interest in the City of Melbourne, access to this information via the internet is in accordance with good governance practices. It is the most effective and efficient means of communication.

This is not the first time Ms Lyons has sort to spend ratepayers information seeking to prevent access to public documents.

In 1999-2001 Ms Lyon wasted over $60,000.00 of ratepayers’ money trying to prevent the publication of detailed results of the Melbourne City Council elections.

The Victorian Civil Administrative Tribunal headed by Senior Member Mr McNamara, in determination of an application made under Freedom of Information Act ordered the City Council to provide access to the detailed elections results without reserving his decision.

The outcome of this case was obvious to everyone but Ms Lyons and the Council’s Governance department. The fact that the decision was made without reservation immediately after the closing statement by the City Council’s legal representative indicated the poor quality judgement and professional advice given to the City Council at the time.

Further reports and updates as they come to hand